The Wrist: Anatomy and Exercise Alterations We hear all about the joints that place a large burden on our day to day lives but for some reason we miss one.

It’s no secret we need to use our hands to complete most of the activities we do throughout our days but it never truly hits home until you are debilitated with aches and pains in the wrist – compromising your everyday rhythm.

While this has been a problem for many of our clients for years before, the introduction of the technological age has only amplified our need for this area to be pain free.

How the hell are you supposed to tweet about what offends you or troll other peoples Facebook posts without sturdy fingers and wrists!?

Your days and workouts will take a beating if you don’t find a way to work around wrist pain, so lets look at how the wrist works and what potentially can go wrong to plan pain-free options for wrist injuries!

The Wrist: A Detailed Look

As soon as we think of a joint, we think of one bones orientation with another for a common action. The more complicated part about the wrist is the multi-joint construction to piece together a coordinated grouping joint. 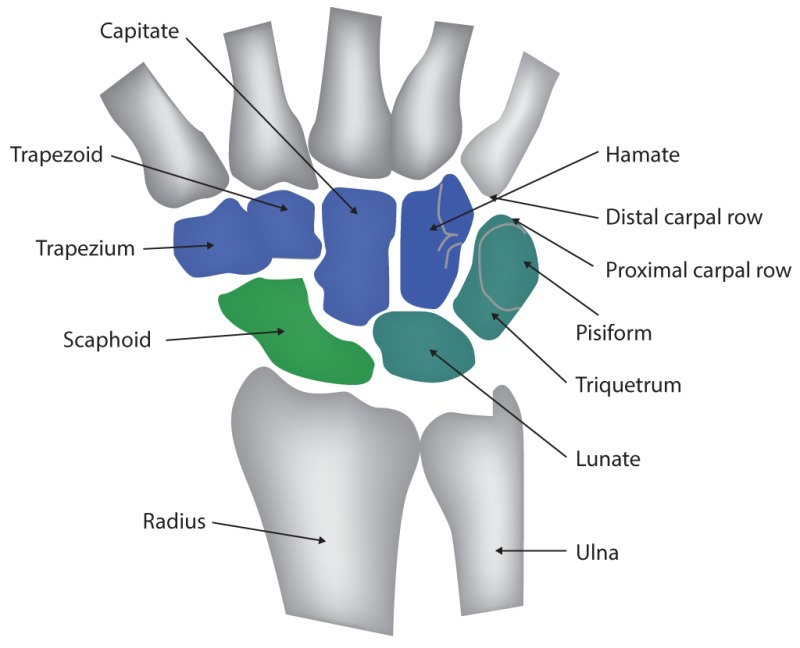 The proximal 4 bones of the hand wrist are the ones working with the Radius and Ulna of the forearm:

While the 4 bones that work on the distal portion and orient with the hand:

More bones involved can mean more detailed action. It can also mean more room for error and potential injury or chronic pain. But just like any joint with multiple ranges of motion, the joint comes equipped with 4 ligaments to assist in adding stability to this structure.

The Radiocarpal ligaments are on the palmar (palm) and dorsal (back hand) side with the Palmar RC joint being the most stable of the 4 ligaments. The Collateral ligaments run on the radial (thumb side) and ulnar (pinky side) and add stability to abduction and adduction of the wrist.

Bones, ligaments, nerves, arteries, and just about everything you can imagine has to travel through the wrist. Such a highly intricate space with so much going on leaves lots of room for potential damage and chronic issues. For that sake, we want to discuss some of the most common injuries you may see with clients and athletes in your day to day.

The wrist can be injured in many ways but for the the sake of this article it felt most appropriate to discuss three of the most common ones you may run across as a coach (or even for yourself). These three are broken down into potential overuse (CTS), autoimmune dysfunction (RA), or bone fracture within the wrist (SF). Carpal Tunnel Syndrome (CTS) is probably one of the most synonymous with wrist injuries in the common public. Most people know this disorder from slaving hours on end in front of a desk, punching away on a keyboard until its time to clock out of there job. That last sentence made me cringe as I am currently plugging away on a keyboard to tell you about keyboard overuse dysfunction.

CTS is the sensation of compression on the median nerve through the wrist. For those who aren’t well versed in nerve paths, there are three nerves that move through the wrist to the hand (Radial, Median, Ulnar). The Median Nerves responsibility is the control the movement of all fingers except for the pinky as well as the feeling for the thumb.

Compression on this nerve is from constantly extending the wrist for long durations of time closing the passage of the nerve. This can also be caused during pregnancy or by the next issue we are going to mention in the list, Rheumatoid Arthritis. 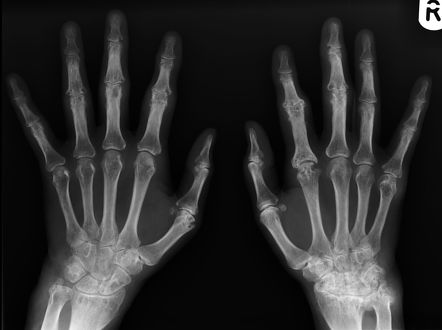 Rheumatoid Arthritis is an autoimmune disease that affects joints within the body based on where the body begins to attack itself. The general rule of thumb is if RA attacks one joint on one side of the body it most likely will/is affecting the same joint on the other side of the body.

This can be a largely debilitating injury considering its ability to swell and inflame at random times rather than being something to expect or anticipate at certain times.

While this does create a troubled relationship with movement, aside from medical recommendations to ease the pain the other recommendations are adjusting nutrition and implementing exercise. With randomized joint swelling, its easy to neglect strength training which causes a downward spiral of physicality.

This can be remedied from specific interventions (some mentioned later) all the way to non-weight bearing exercises such as pool workouts.

Breaking a wrist happens to more people than you would imagine and the most common site of that break is the scaphoid bone. This generally happens when someone falls on an extended wrist and the scaphoid bone is the one that bears the brunt of the trauma due to its placement.

There isn’t much you can do about breaking a bone. Be realistic, falls are going to happen.

Understanding where falls can most affect us and where someone may feel some lingering pain and attention is a major part of the equation of program design.

For these exercise recommendations it will vary between specific situations. Lets be clear, not all wrist pain is equal. While we can’t pinpoint the issues for your clients from behind this computer screen, what we can do is give you exercise substitutions with rationale to help give perspective on how you can also level up your program design with some minor tweaks.

The Issue: In the top rack position, there is an immense amount of extension on the wrist to simply keep the bar in place. Opting to the bodybuilder (crossed arms) method just simply isn’t going to cut it. Frankly, I don’t want to put my client in the situation where they may have to use their wrist if its that vulnerable of a region. For that reason I would opt for…

The Reason: Besides the obvious fact of the hands not being involved, the front loaded weight mimics the front squat. This means you will be able to maintain that upright nature without getting the hands involved. Most people would say, “what about a goblet squat”?!

I mean, MAYBE. But massive extension to mimic the weight you could do with a front squat might put those wrists down for good. Get used to the Zercher’s

The Issue: Just look at how much extension happens at the wrist. Its a common issue with people looking to start strength training and build muscle mass who run into joint issues at the wrist. For proper drive, you want to push through the base of the palm to drive the energy directly through the floor to bone. For less wrist stress you really should opt for…

The Reason: While you still need to control the weight, you will sustain a much straighter wrist position to translate toward your pressing movements. You could mimic this will neutral grip push-ups but to be honest, most people with wrist issues that may be a little heavier generally will have a hard time with neutral grip push-ups based on one missed variable – fear.

They know their wrist hurts and all of the pressure is on that area. You can “trick” them into releasing some of that fear by flipping the exercise upside down and doing neutral grip chest press.

The Reason: Once they do build up the confidence to attempt neutral grip push-up’s, this is the most stable option. I have never been a fan of doing push-up’s on kettlebells or dumbbells that can easily tip and roll away. The trap bar provides a level of safety the others don’t as well as the ability to rack it and slowly lower it to the ground over time.

The Issue: Sometimes, no matter how much you may think decompression at the wrist will help, it could do the opposite. When grip strength isn’t an option due to aching pains, it becomes very difficult to try and pinpoint the posterior chain specifically from an upper body perspective. This is when you could add in…

The Reason: This posterior chain torcher is driving from the elbows, not relying on the hands. This means you can have a strong static hold while keeping those back muscles nice and active to remain as strong and sustained as possible.

To Wrap it Up

The wrist is an always important joint when it comes to upper body movements. Activities of daily living that once we took for granted can become near impossible tasks when this specific joint gives us issue.

This shouldn’t mean to abandon ship on strength training. The research and recommendations are clear its important to maintain your muscle mass and strength to assist you through this type of situation.

As a coach, its your responsibility to exhaust all possible answers when programming for clients. It is our job to find SAFE and EFFECTIVE protocols. David Otey is the Chief Content Officer for the Pain-Free Performance Specialist Certification as well as Lead Master Instructor for the course. Otey is a member of the Men’s Health Advisory Board who has been featured for his expertise in the field of Personal Training. With 14 years of experience as a Personal Trainer, David has presented education internationally for organizations such as the NSCA, Universities, and private facilities. David has been a long time fitness writer featured on Men’s Health, Muscle and Fitness, Onnit, and Weight Watchers as well as featured in numerous worldwide publications.
mood_bad