Almost everyone in fitness or strength & conditioning wants to work with athletes at some point early in their career. But what happens to these athletes once they hang up their proverbial cleats?

We know that many of the gen pop clients we take on have 30 plus years of use, abuse, misuse and disuse that we must account for; now add the exponential repetitiveness of sport and skill athletes on top of that and we’ve got a very complex human body to work with.

Knees, shoulders and backs tend to be the areas of concern for most.

I can certainly attest to the latter part of this statement. I started playing organized sports at an early age thanks to being larger than most of my classmates and my dad running the local recreation program and still play pick up basketball when the stars align.

Becoming a fitness professional changed my perspective on the differences between health and performance. The willingness to work harder, play injured, take no plays off benefitted me and others to the levels of success we achieved.

Now the challenge is getting former athletes bridged from sport performance training styles to more of a holistic approach to fitness where pain is not a part of the process.

Over the last 20 years, athletic injuries have increased at alarming rates.

Whether it be the increased size and strength of the athletes or the lack of movement variety due to sport specialization too early, there are more hurdles to take into account when training these former high performing athletes.

Motivation also plays a big role in the training of former athletes. Where performance on the court or pitch was once the motivator for training, figuring out what gets their engines going now will be paramount.

Discovering their WHY will help keep them painting inside the lines instead of rushing to the results of their past athletic career. Kevin Mullins wrote a great article recently about finding your clients WHY here.

Many former athletes associate training with pain and still have lingering effects of injuries sustained in college 10, 20, even 30 years ago.

This is where we need to help this group understand that performance tends to sacrifice health. Getting as strong/fast/explosive/massive as possible in a short amount of time is typically the aim of general collegiate strength and conditioning as long as it supports skill performance on the court or field.

Long-term physicality is left for private fitness professionals to work through post-career. This is part of the reason you see many former NFL linemen drop 100 plus pounds once they retire and basketball players balloon on the scale.

The ability to have an active lifestyle is the hard corner to take but can be the best approach for a better quality of life as they age. 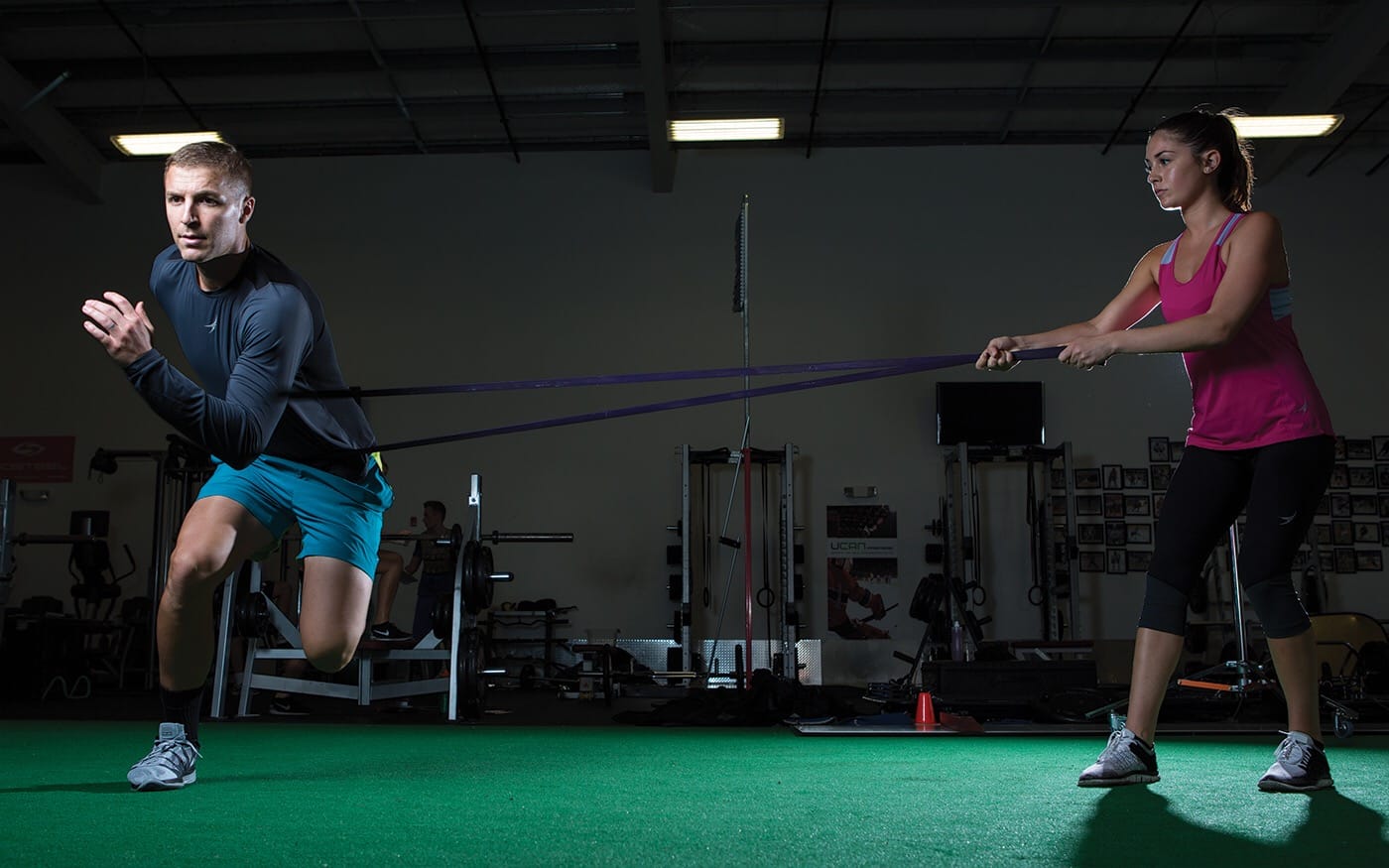 Knees, Shoulders and Backs are where most former athletes struggle when it comes to starting up a new training program to support their new lifestyle. 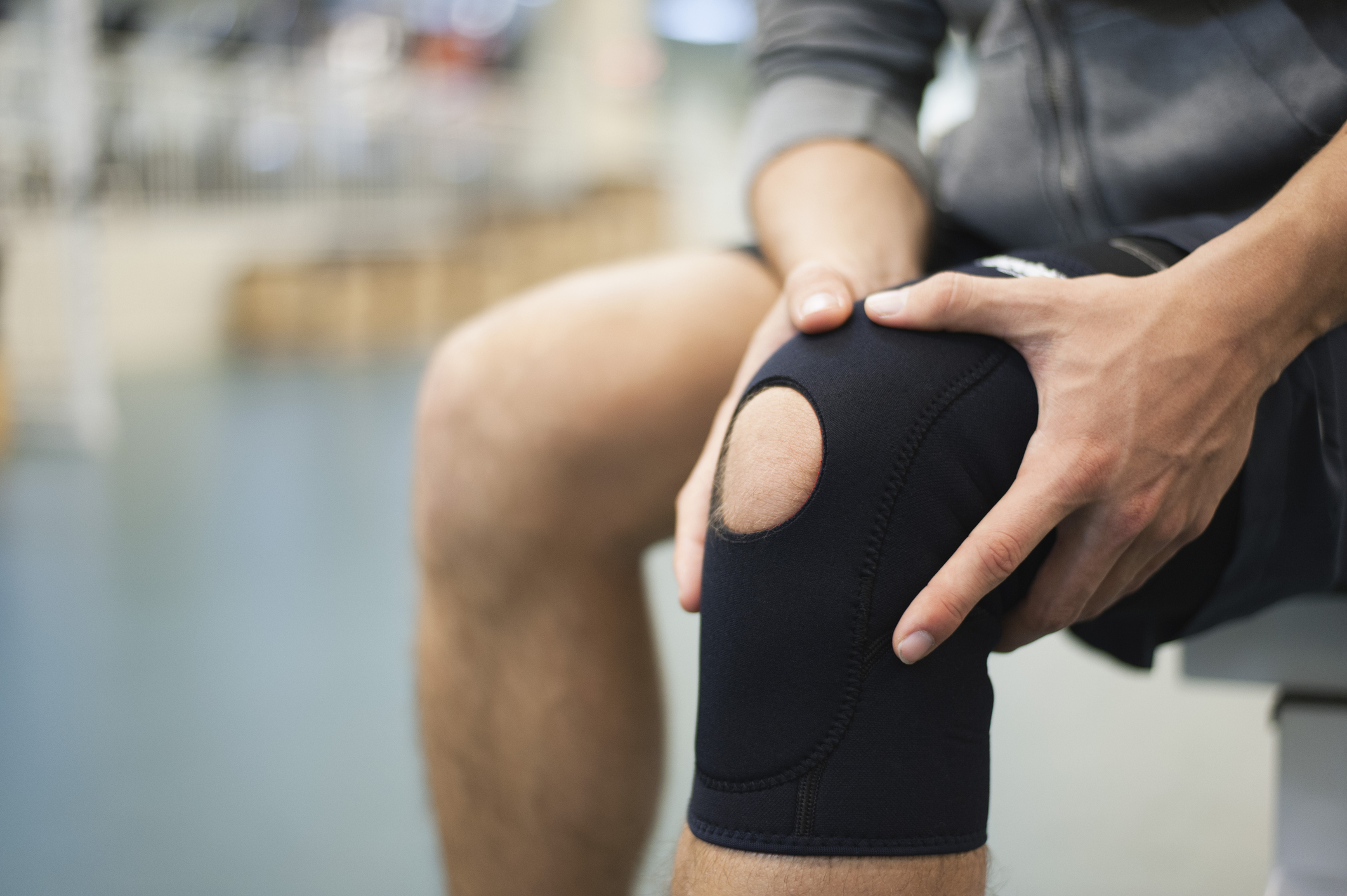 40% of former Division I athletes are diagnosed with osteoarthritis compared to just 24% of the general population. Training the musculature around the knee (quads, hamstrings, calves and glutes) can help alleviate the effects of osteoarthritis.

Training isometrics is an easy way to get the athlete into better positions, create tension and get an analgesic effect before moving into dynamic full range movements (which is where most want to start). 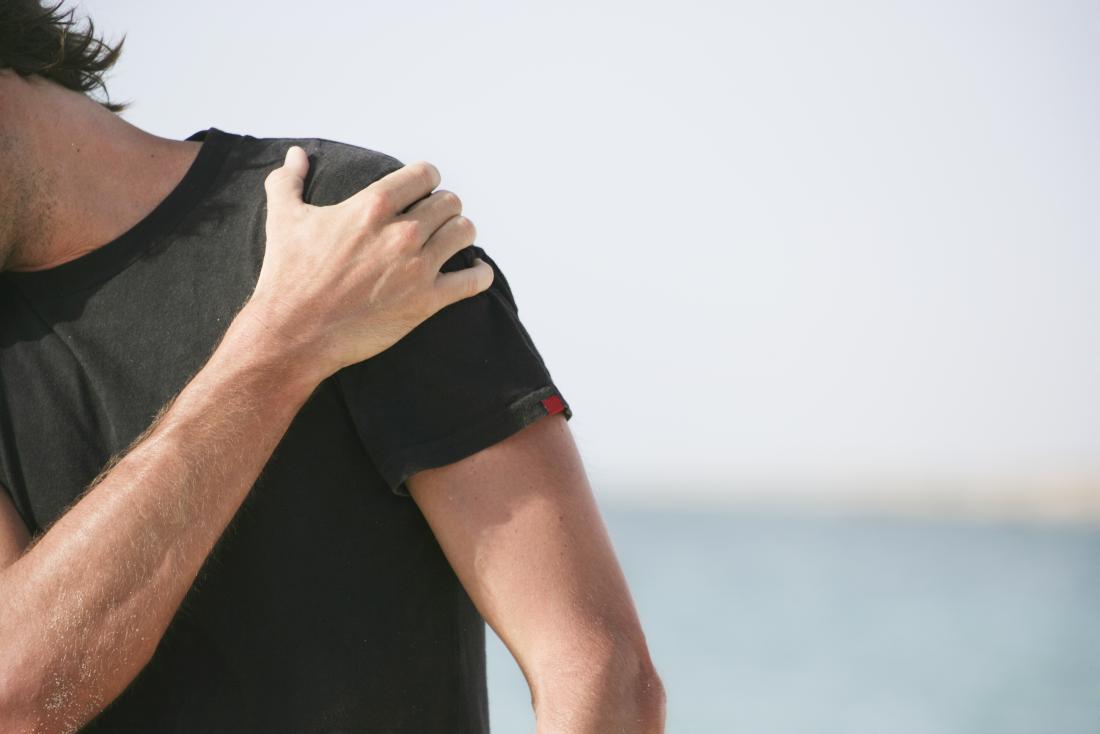 30% of overhead college athletes experience a documented shoulder injury. Add the common sedentary desk posture of the average American adult and incidence of shoulder pain goes through the roof.

Programming to avoid pain similar to a non-athlete is the best route here. Build to the overhead position with the 3:1 pulling to pushing ratio and make sure the scapulae can dynamically stabilize this shallow ball and socket joint. 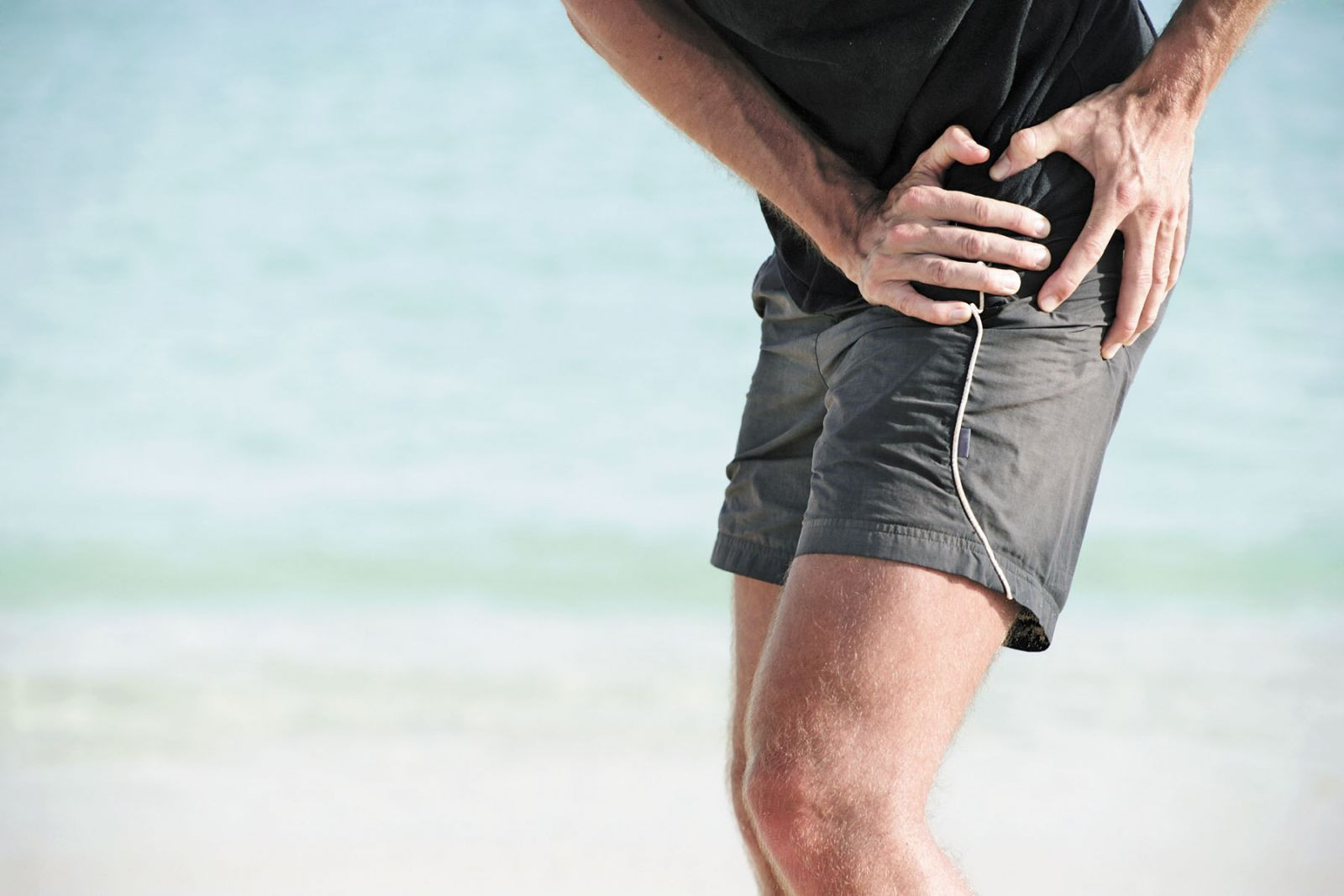 Living in the athletic position AKA quarter squat trains the hips to live in a shallow power position. Many athletes continue to live in this position but neglect to train the full range to keep the partial range strong.

Lots of use and abuse in the same movements leads to overuse injury and what you don’t use in range of motion you lose.

Getting the hips to move in different ranges of motion and setting the athlete’s ideal squat stance using the squat advanced assessment, will help prevent compensatory patterns up and down the chain, especially in their backs.

If you can manage these three key areas you are taking care of a large percentage of what can be vulnerable areas. It may seem familiar these issues are eerily similar to those in our general population clients. Well, they are.

But the level of stress and strain on the former athlete most likely sped up that wear and tear dramatically.

The last piece of the former athlete puzzle is the motivational aspect of training.

These former athletes have probably been put through the ringer by past coaches, get a nervous tick if you say anything about “getting on the line” and are used to being critiqued and judged for all aspects of their physicality.

Athletes were athletes for as long as they were because they were able to adapt to the changing environment of the field or court. Relate the movements back to their sport of choice and get them excited about doing things they haven’t done in a while.

Plyometrics and power movements will be the fun stuff you can throw at athletes and they will excel, however, they’ll also need to work on motor control (stability + mobility) in order to train the strength that supports the more powerful movements. 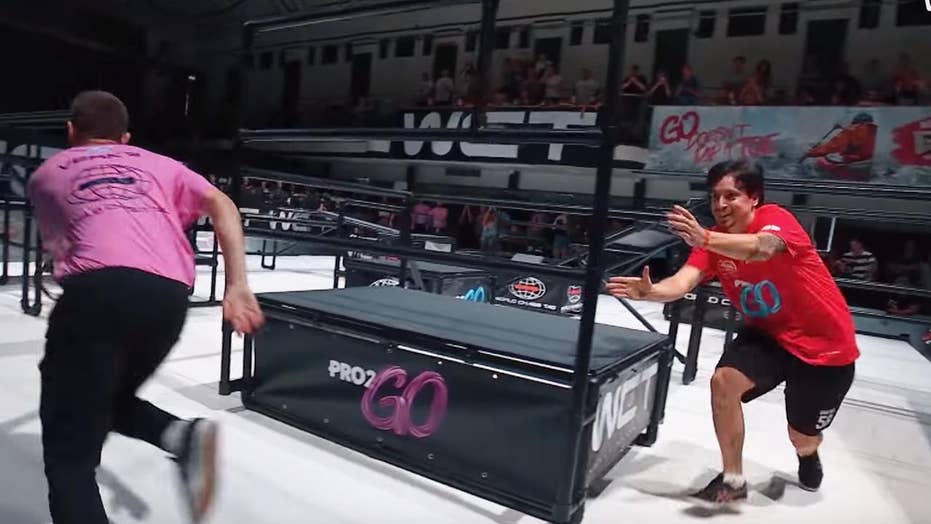 There was a time when what the strength coach said was law. Now that we are much smarter with our coaching skills, ask for feedback from the “athlete”.

This will tell you if the targeted tissues are being worked or if there is some confusion on the athlete’s part of understanding the movement in general. Create a dialogue with the athlete in order to avoid hurdles that prevent them from training, like a pissed off back or shoulder. 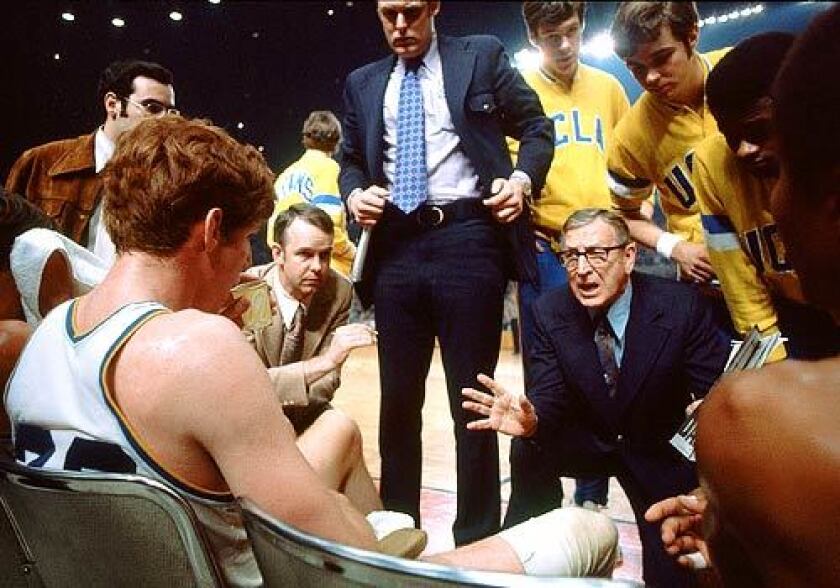 Athletes seek feedback just as much as a good coach seeks feedback. Just because someone played at the highest of levels, doesn’t mean they are perfect movers.

I’ve worked with a former NBA player who couldn’t bend over to tie his shoes in his 50’s. Your job is to help them move better, more often and enjoy a physical lifestyle off the court and a little coaching is required to do that! 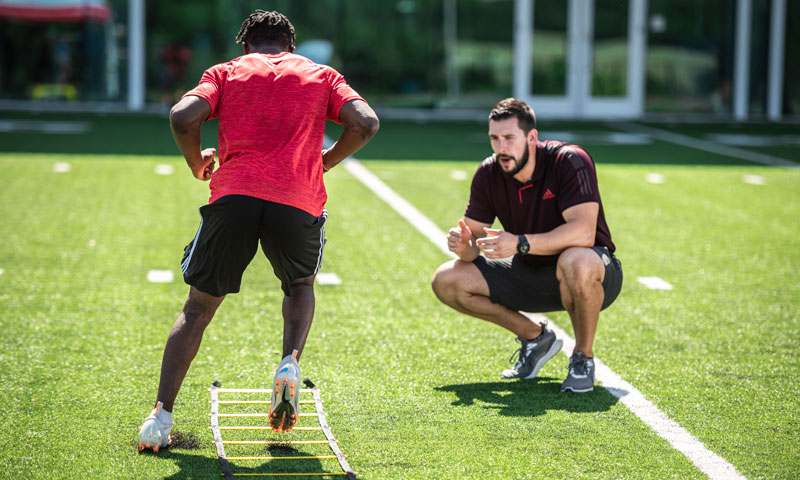 Here’s the weekly program outline of one of my clients. He spent years playing hockey, from college into Junior A Hockey for a few years (minor leagues) and still has the competitive mindset.

Tapping into that has kept him progressing in the gym since we started and focusing on maximizing what we do in the gym to take his mental and physical performance outside the gym to the next level.

The Current Regimen – He trains four times in the gym each week following a lower/upper body split that is reminiscent of a concurrent style of training. We hit an athletic-based primer following the 6-phase warm up based on the daily KPI.

Then hit a big barbell lift before hopping into more non-traditional functional-type variations for the remaining movement patterns for lower and upper body.

Linchpins – include tight ankles and hip mobility and each are addressed in the warm-up and throughout the workout. Each of the exercises are familiar but tweaked slightly to meet his needs.

6-phase warm up covers the KPI and corrective exercise and we train full accessible range in each exercise selected to ensure what we prep gets trained and improved.

Keep in mind, if cranky shoulders are a limiting factor but they still want to press, throw them on the landmine for a more vertical-ish push and you give them what they want and need at the same time.

This is where you as a coach get to be creative to provide what the client wants and still elicit the training effect you know they need.

The weekly rec league hockey games provide him with the opportunity to breathe heavy and move in different planes of motion and fits nicely in the middle of the week. Since hockey is shift based, he’s only playing a few minutes at time, think aerobic power intervals. So no need to stress him out trying to get in a cardio session.

For the former athletes who are past their playing days, even the rec leagues, putting together ESD (energy system development) days that mimic their sport tend to be a little more motivating to do than sitting on a stationary bike watching the 5 o’clock news.

Circuit bodyweight and banded movements in different planes of motion are easy to string together and allow for more touches on the foundational movement patterns and increases heart rate and breathing due to the circuit style. As a former basketball player, anything is fair game except lines.

Family time is just as important as getting a sick pump in the gym, so enjoying all that Colorado has to offer takes care of the weekend training. Long hikes, skiing and biking allow the body to recover from the work of the week. Make sure your athletes have an outlet outside of the gym to put their gainz to use.

Former athletes are like old muscle cars; lots of miles, need a little body work but still are fun to drive. This group has likely performed at the highest of levels and motivation tends to not be the issue. But like that old muscle car that needs some work, the basics go a long way in getting the former athlete to move and feel better so they can enjoy the fruits of their labor.

Gini is a PPSC Instructor and Director of Fitness Product for Vasa Fitness. Grimsley is a CSCS through the National Strength and Conditioning Association. With years experience in sport and training, Gini is sought after for her expertise in Personal Training and health club management.
mood_bad

PrevPreviousReal Recovery – Why You Need It and How To Do It Effectively
NextHow Much Does Personal Training Cost!?Next